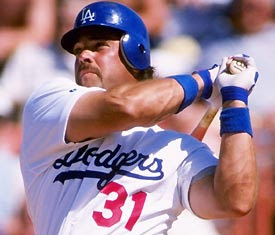 I’d loved to have had exit velocity in the early days of Piazza’s career because it seemed to my naked ear that I’d never heard anyone hit the ball as hard as often as Piazza at Dodger Stadium. Until Gary Sheffield showed up.

1991 – found the Dodgers with an astounding six  All-Stars. For five of these six that would be the only time they represented the Dodgers in the all-star game. At the time many expected that to be the first of many all-star appearances for Darryl Strawberry who was appearing in his eighth straight  (seven as a Met) but instead,  it was his last.  Ramon Martinez is a curious case. Baseball Reference and other searches don’t have Ramon Martinez listed as an all-star but Mark Langhill the noted LAD historian with an assist from Jon Weisman assured me that Ramon was indeed an all-star in 1991

Martinez was selected to the All-Star team in 1991, but didn’t pitch because of a hip injury. He was replaced on the ASG roster by Dodger pitcher Mike Morgan. He is considered one of the six Dodger All-Star reps in 1991, along with Butler, Strawberry, Murray, Samuel and Morgan. (Strawberry was selected but due to injury was replaced by Montreal’s Ivan Calderon).

1992 –  found the Dodgers with possibly their most unlikely All-Star selection, utility infielder Mike Sharperson.  The Dodgers were bad in 1992, but every team has to have an all-star so Mike was chosen to represent the Dodgers.

1995 – Jose Offerman made an appearance that he didn’t deserve.   Jose may have hit the ball ok in the 1st half of 1995 but he was making errors hand over fist and that was not an all-star combination. 1995 was the one year that Eric Karros should have made the team.  Karros would never make an all-star team, but if he had, it should have been 1995. A trio of ROY winners represented the Dodgers. Piazza from 1993, Mondesi from 1994, and 1995 ROY  Hideo Nomo. For Mondesi and Nomo that would be the only time they were selected to be all-stars.  Nomo started the game and Piazza hit a home run to lead the NL to a 3 – 2 victory. Todd Worrell also made the team.

1998 was the bizarre year that Jeff Shaw represented the Dodgers in the all-star game after being acquired from the Reds on July 4th. The game was played on July 7th, so the first time Jeff Shaw wore a Dodger uniform was at the all-star game.

Gary Sheffield continued the Mike Piazza tradition and made the team back to back in 1998 and 1999.

Here is a link to all of the LAD All-Stars.