Brother in Arms by Jon Weisman 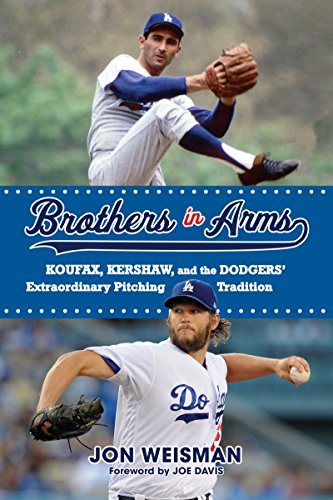 When Jon Weisman announced his new project last year I was excited to see what kind of prose he could put together about the pitchers of my youth and the pitchers I read about in my youth.  His book is called Brothers in Arms: Koufax, Kershaw, and the Dodgers’ Extraordinary Pitching Tradition and is now available in both hardcover and kindle versions.

Even though his book had dropped over a month ago, the Kindle version didn’t drop until this past week on May 15th.  I could have bought the hardcover but I’m waiting to buy some of those from Jon himself when he does a book signing at the Brewery on June 3rd.

Common Space Brewery in Hawthorne, opened up earlier this year by Brent Knapp, is hosting a book signing and Dodger game viewing on June 3. For those of you that enjoy beer and/or the Dodgers, which hopefully is most of you, this should be right up your alley. Jon Weisman will be signing copies of his recently released second book –  Brothers in Arms: Koufax, Kershaw, and the Dodgers’ Extraordinary Pitching Tradition. The event starts at 12:10 with the Dodgers first pitch, and around 2 or 3 Jon will read parts of his book and be available to sign copies of the book or chat.

The brewery will have a food truck on-site and also offer non-alcoholic beverages for those that don’t drink beer. Hopefully some of the DTW crew can make it, as it should be a really fun afternoon and good chance to meet and hear from Jon.

Common Space Brewery is located at 3411 W. El Segundo Blvd., Hawthorne. For anymore information feel free to reach out to Brent directly at 310.666.2825.

I was also given an advance copy of the PDF, but I’ve found that I’m quite addicted to reading now on my kindle so I waited for my kindle version.

I liked that Jon started it off with a full chapter devoted to the type of stats he was going to use. Many of us already understand these stats but for those fans who have never touched a sabermetric stat, and don’t get to listen to Joe Davis explain these modern-day statistics because they don’t have the Spectrum option,  it was a good idea to start the book with an explanation of these stats.  To be sure Jon does talk about wins a lot, which might seem foreign to someone who just read Keith Law’s Smart Baseball, but in the context of the era that most of these hurlers pitched in, it made perfect sense to use the antiquated Win stat.

Jon starts us off with the legends of the early Brooklyn pitchers, and while it was interesting, he didn’t really grab my attention until he got to Ralph Branca. The Boys of Summer. I had read all about these hurlers back when I was 10 – 15 and knew every name quite well but a boy of 10 didn’t know jack about innings pitched, and as I read how each of these hurlers were slogged by their respective managers, I will have to admit that admiration and anger were the emotions that played around in my mind. I know now, that all pitchers of that generation were used and discarded at the whim of management, but to see the numbers they put up still staggered me. Jon made a great point to show that for every infamous defeat, you could almost always point to how the pitcher was pitching on guts alone.

Jon hits almost all the pitchers I was interested in reading about. One problem with being a Dodger fan as long as I have, you don’t get surprised but for those fans who are new to baseball, or simply were Dodger fans but not crazy fans, these chapters should enlighten anyone about the arms who build the great Dodger pitching legacy.  As much as I already knew about these pitchers, Jon found new information that was always a pleasant surprise.  It was also cool to see Jon use sources such as Eric Enders who once said something about me that kept me writing when I figured no one was reading.  Heck I expected to see Bob Timmermann used as a source and sure enough, he was mentioned in the acknowledgments.

Even the casual fan knows about Koufax, Drysdale, Sutton, Fernando, Orel, and Kershaw, but if they were just learning about Johnny Podres, Claude Osteen, Bill Singer, Burt Hooton and Jerry Ruess there is no better guide than Jon Weisman.

I’m not a proper book reviewer as I’m sure those who do this for a living have a certain way of reviewing a book. I consider Jon a friend so even if I didn’t like the book I would never say that, but since Jon is one of the best writers in the world of baseball that was never going to be an issue.  My last several baseball books, I will admit to getting bored and not finishing. Keith Law’s Smart Baseball and Molly Knight’s “The Best Team Money can Buy” both still sit unfinished with the kindle bookmarks ready to start me up again when I feel the urge to jump into it.

Which is a good thing when you want more and not less.  I’ll be using this book for reference over and over which is where I hope the kindle search function comes in handy.

This is a stat-filled book as Jon uses these stats to show why these pitchers got their own chapter but within each chapter is beautiful writing. Each paragraph that starts a chapter can be savored. Ah, to write such lead-ins.  I’m not going to put any of those in this review. Read the book, find them for yourselves and meet me at the Common Space Brewery on June 3rd where we can talk to Jon and tell him our favorite lines.

Okay, I’ll leave you with one. Jon starts the Bob Welch chapter with this:

I’m not done with this writing about this book. I have my own thoughts on most of the Dodger pitchers he wrote about, and I hope to put some notes to their names with the memories of having watched them pitch along with the information that Jon provided on them.

There were so many games mentioned in the book that I have actual personal connections with that at times I felt I was reading about my own journey as a Dodger fan.  It started with Don Sutton/Bill Singer and is right now in the throes of Clayton Kershaw and Jon hit all the right notes in this symphony to the Dodger hurlers that have touched all of us.