These don’t have anything to do with the game.  You can read that in over twenty other Dodger blogs, this has to do with how Dodger Stadium prepared for game seven.

For a game seven, I expected more hoopla than opening day. Didn’t happen.

As I was walking onto the stadium grounds I eyed the Budweiser Clydesdales and thought, damn they are bringing out the big guns. I was there at 02:20 for a 05:20 game and the horses were still in their trailers so I wandered over and took a few photos. Say what you want about Budweiser beer, the Clydesdales are cool. 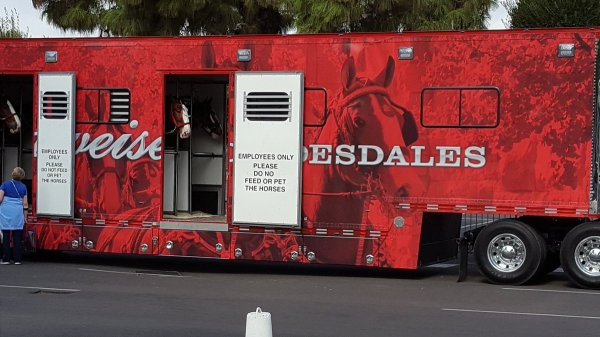 That may sound petty, and it very well could be.

With hours to kill I started going into all of the merchandise stores so I could get some World Series gear.

Not a damn thing was available. No hats, no clothes, no nothing.

The other petty complaint that they didn’t do any pregame hoopla. Now normally I wouldn’t care, but this being my first and possibly only World Series game, I wanted some hoopla. They didn’t introduce the players on the field, they were simply introduced via the public address announcer as though this was just another game.

Why was that skipped for this game?

The Clydesdales never made an appearance inside the Stadium. Why were they there?

I loved seeing Newk and Sandy throw out the first pitch but I have to admit, a cool tribute might have been having a relation to Roy Campanella and John Roseboro catch their throws being they were the main catchers for both pitchers and have both passed away. We have seen Rick Monday and Steve Garvey many times before.

And why couldn’t they find some video to put on the board about Newk? That might be a hard archive to find but somewhere they have to have film of the greatest pitcher of 1956?

I left the game with one momento. A World Series soft drink cup.  I don’t even have a ticket because they don’t do hard tickets anymore.

Oh, and dammit now I have to agree with Bill Plashcke about Yu Darvish

99 out of 100 pitchers would not have pitched so bad in consecutive starts.

Also George Springer would have gotten my MVP vote even if the Dodgers had won the Series.