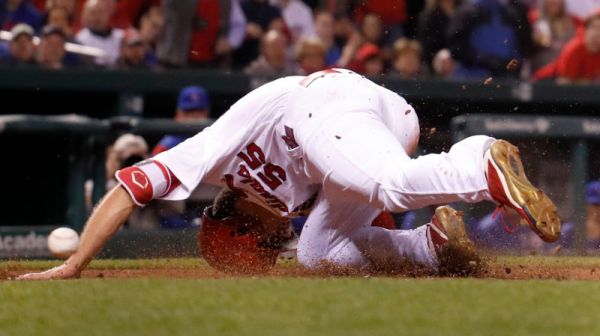 I just watched Stephen Piscotty have one of the more painful turns you will watch and you can pin most of the blame on Contreras.  He was hit on the right elbow by a pitch from the hard throwing Jake Arrieta. He advanced to 2nd and was plunked on the left elbow on the throw from the catcher Contreras. He scored from 2nd on an infield ground ball but Contreras missed the throw as Piscotty was sliding home and it hit him square in the head.  It laid him out but eventually he got up and made his way to the dugout and probably the training room.

Richie Weeks is still playing baseball. He showed up today batting cleanup for the Tampa Bay Rays. In the bottom of the 8th he came up with the bases loaded but struck out.

Maybe CC still has some life in his left arm, as he threw five shutout innings against the Rays.

Staying on the Rays, batting 5th and playing SS for them was Tim Beckham.  Beckham was the overall number one pick of the 2008 draft. The Rays could have saved the world from three Giant rings by simply picking Buster Posey instead of Tim Beckham. I hope Friedman didn’t have anything to do with that pick.

Carlos Santana is the leadoff hitter for the AL Champion Indians. Santana entered the game with over 150 home runs and over 600 career walks. Grandal is basically Carlos Santana but with the ability to catch. Maybe someday Grandal will parlay his patience into a leadoff role.  Carlos is one of twenty active players to have at least 150 home runs and 600 walks.  Carlos is one of three active switch-hitters to have at least 150 home runs and 600 walks. The other two being Carlos Beltran and Victor Martinez.

The Rockies are on the road against the Brewers and they have two wins, and Greg Holland has two saves.  That is your NL Western Division leading Rockies.

Danny Espinosa didn’t get to enjoy a walk off but his 3-run home run in the top of the 9th gave the Angels a 7 – 6 victory.  Espinosa can do two things well, play great infield defense and hit home runs.  Tonight he did what he was acquired to do. Has to be special when your first hit for your new team is a game-winning home run.