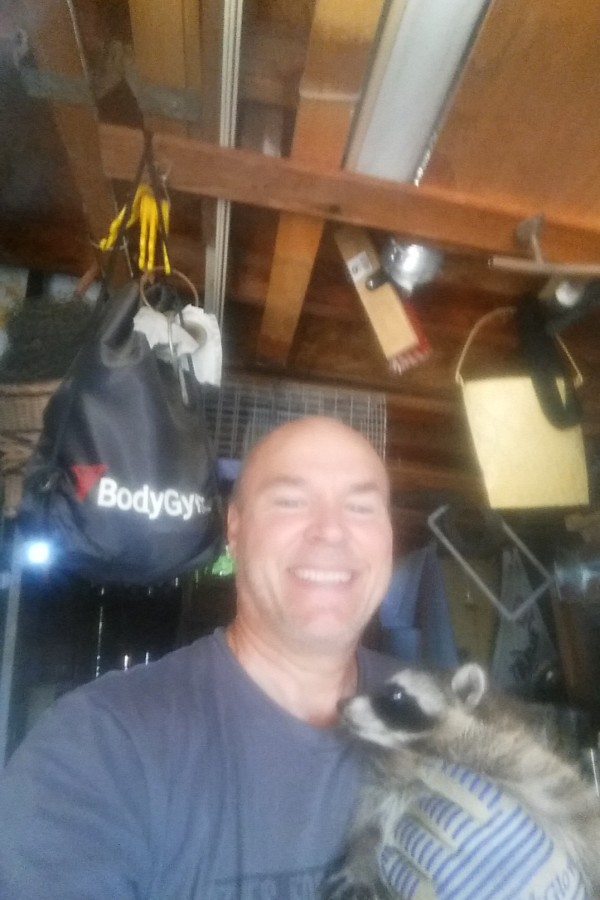 One of the first books that I read as a child that left an impression with me was the book Weecha about a raccoon that is chased by hunters and their dogs.

Memories being what they are, I was off a bit. The book is about Weecha the Raccoon but the main story was the friendship between Weecha and an orphaned puppy who ends up having to hunt Weecha and instead saves Weecha from the other hunting hounds.

Hunting, drowning puppies, animals being killed by Nature. It was classic early Disney but no one would recognize it anymore as a Disney property which is all happiness and blueberries these days.  No one would read this book to their child today. Not without some parental editing.

Anyway, for such a simple book it greatly impacted how I would live my life. I was so taken with the characters and the fear they felt from the hunters I never felt the urge to hunt the rest of my life and raccoons have always been one of my favorite animals.

Living in Woodland Hils for the past 20 plus years we have had numerous encounters with raccoons at our house. We have a fence just a few feet from our bedroom window and summer after summer we have watched mothers parade their brood over our fence past our window. We have always wondered how they make the trek because they have to cross busy Victory Blvd to get to our house. Why don’t they just stay on the other side of the street? Pick a side is what I thought every time we saw them make the late night journey across Victory.

Their luck ran out Friday night. It was about 11:30 when Verdell said she just heard a car accident. We have had numerous car accidents in front of our house as people simply underestimate how to make a left turn with a car coming  55 MPH at them. About ten years ago we even had a jaywalker get killed.

I went out front and couldn’t’ see any cars so I just thought she had heard something else, but as we were about to turn around we noticed someone else come out across the street. At that moment I saw a large raccoon laying in the middle of the street. We started to hear screaming coming from the street, so loud it was upsetting to the mind. I felt the raccoon had been mortally wounded and was screaming in pain.

I’d like to say I immediately went to help the hurt raccoon but that was not the case. We went inside to call the animal pickup people, and I just hoped the raccoon would die soon at which point I’d go out and move it from the street because nothing is worse than it being splattered numerous times.  As I moved to shut the windows to drown out the screams, I changed my mind and decided to see if I could do something.

I put on some gloves and left the house, as I did so I now noticed three women on the street. Two were fifty yards further away from the large raccoon I had seen and one was in front of the original raccoon.  The women were doing their best to stop the traffic. The traffic was sparse at that time of night but they tend to drive fast so the fact they were doing that emboldened me to do something.  I had a large blue bin in my truck that I had just used to help someone move with, I emptied the bin and ran out toward the raccoon. It was twitching and making noise but not the screaming I was hearing. At the moment I was focused on how I could get this fifty-pound raccoon into the blue bin with out being bitten or scratched.  I couldn’t pick it up, I knew that, so I turned the bin on the side and as the raccoon was twitching I was able to kind of scoop her into the bin.  I picked the bin up and ran to the sidewalk, she was still twitching and making horrible noises when I put the bind down.

With the large raccoon off the street, I looked toward where the other women were stopping traffic. Something else was on the street and that was where the raucous noise was coming from.  It was smaller than the large raccoon I had just scooped up. I ran toward the noise and as I got closer the screaming from the animal was piercing to the ears and worse,  to the heart.  I could tell this was a baby raccoon which meant that was the mother I had just scooped up.  The ladies from across the street had done a great job in saving the baby raccoon from being splatted by stopping all traffic but they didn’t know what to do with the baby raccoon.  When I arrived I expected to find a small raccoon in need of medical care because of the noise coming from it.  I took a quick inventory and didn’t find any spilled guts or smashed head. It actually looked just fine. Without really thinking I reached down and picked up the baby raccoon and put him in the box I had brought with me. To my astonishment, it stopped yelling. Instantly. It didn’t try to bite me. It didn’t try to scratch me.  I took it back to where the mother was.

The baby raccoon was now an orphan.

I gave the baby a moment with the mother and then picked it up and found a dog carrier to put it in.  I would pick up the orphan for each of the tasks I needed to do and each time it would calm down. Our orphan had gone from making the saddest noise I’d ever heard before, to being simply mute. Of course, it was in shock, but I was thankful it was so calm. We spent the night and morning trying to find a rehab specialist for raccoons. With help from the animal care community and our friend Sherry, we eventually found a lady in Pasadena who specialized in rehabbing/orphan raccoons and opossums.

Today we took the orphan raccoon to the lady who worked here as a vet tech.