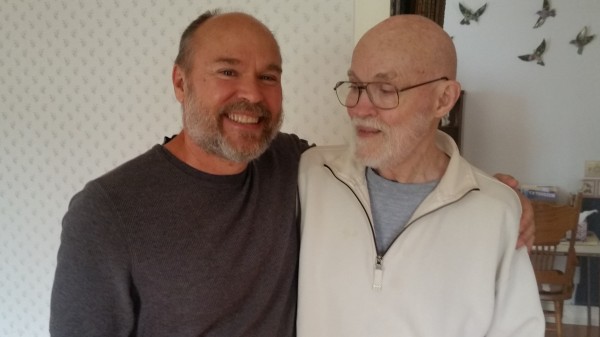 I went up to Ferndale (650 miles north of Los Angeles)  this week to see my Dad on his 89th birthday. I also had one other goal. When my Dad was in the army he shaved twice a day from West Point to Frankfurt, Germany a span of 22 years. When he retired, the first thing he did was stop shaving and has had a beard since 1970.  Eventually, that beard became gray, and he used the moniker Graybeard for the numerous rotisserie baseball/football games he played with me and my friends.

A few weeks ago I started playing in a senior softball league but being one of the younger players in the league, I felt a little out of place. I grew a beard, and not surprisingly the beard is mostly gray. I had become Graybeard and fit in better with the senior softball players.

I also thought it would make a good photo opp with my Dad when I went to see him.   I showed up expecting him to comment on the beard because I hadn’t had one in well over twenty years, but while he recognized me, not a comment about the beard.

I got my photo op, right after he had his beard trimmed at the local barber shop.  I hope I can look like that at 89. Physically he’s doing very well. actually seems stronger than the last several times I had seen him. Strong enough that I took him for walks without his walker and he seemed to relish the freedom. I had to keep a sharp eye,  lest he tumble but he was able to navigate quite well. The dementia is still there and rambling conversations that made little sense to us, but perfect sense to him as he told some story that came from him on his birthday.  Memory is weird, he would remember something from 50 years ago but have no idea if he had eaten breakfast or not.

I’m still there, will be here for a week.  I hope we can make a big deal about his 90th birthday next year. At which time I’ll ask my four brothers to grow their beards for the occasion.